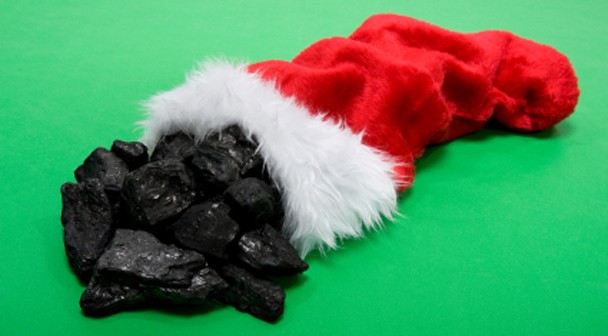 The Christmas legend that naughty children will receive a lump of coal in their stocking instead of gifts has numerous probable roots. The distinction between each genesis myth is cultural, and it varies by country. The answer to “who did it first,” like most cultural conflicts, is buried in decades of retelling, but it’s interesting to ponder all of the possibilities behind the legend.

One of the numerous origin legends begins in Italy, where many believe in La Befana (a witch who brings gifts) rather than Santa Claus. When Jesus was born, La Befana noticed a beautiful star in the sky and went to fetch toys and other gifts for the infant Jesus, but she couldn’t find the stable. Every year, she searches for Jesus and leaves presents for nice children and coal for bad. Italians now use a confection called Carbone Dolce to make the folklore into a comedy. The black, rock-like confectionery resembles chunks of coal.

Some claim that the narrative of lumps of coal began in the 16th century in Holland. Before stockings were introduced, children would set their clogs by the hearth. When a youngster was naughty, he or she received a lump of coal, but when they were nice, they received a little toy, cookies, or sweets.

Most of Europe was powered by coal in the nineteenth century, and most domestic furnaces burned coal. In the middle of the night, a pan of hot coals was frequently kept under the bed to create heat. While the children of wealthy households received sweets and toys in their stockings, those who were poor (believed to have been created poor by God as punishment for their family’s evil actions) received coal if they were lucky.

A proud yet impoverished nobleman had three daughters who were about to marry. The difficulty was that he didn’t have any dowry to offer them. Saint Nicholas discreetly provided the family enough money for their daughters to begin their new lives with their new spouses. He accomplished this by stuffing the money inside several stockings that were drying near the fireplace. When word of this miracle spread, everyone began hanging their stockings by the fire in the hopes that the mysterious benefactor would visit them. He did travel to those residences, but for those he knew were evil, he left them with a lump of coal instead of money.