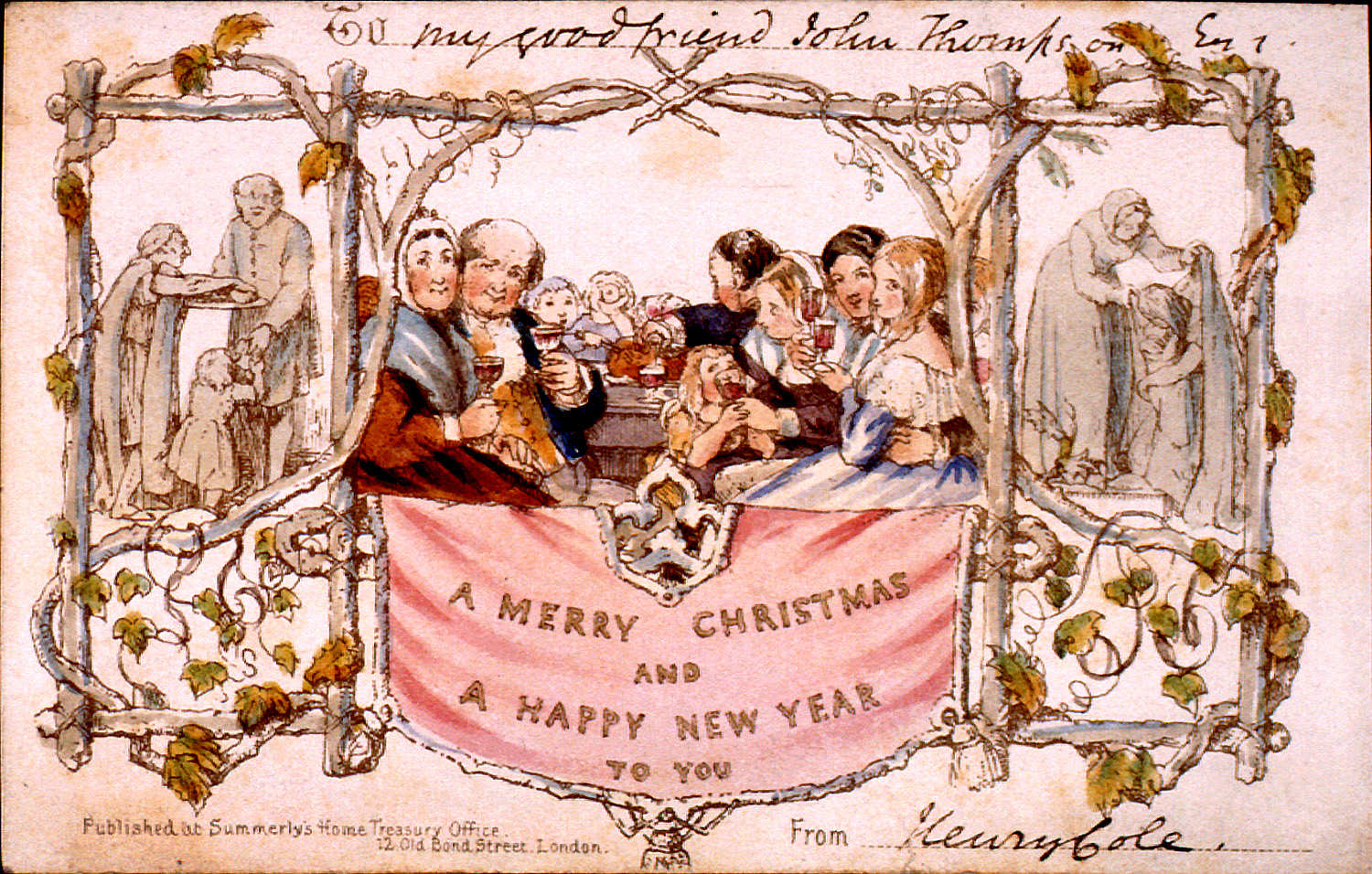 For hundreds of years, people have exchanged Christmas greetings. The phrase “Merry Christmas” was first recorded in a Christmas letter delivered in 1534.

In 1611, King James I of England (who was also King James VI of Scotland) received the first known object that resembled a Christmas card. This was more akin to a big decorative text than a card as we know them now. It was folded into panels and measured 84cm x 60cm (33″ x 24″). (it might have been folded so it could be carried around). It included a rose in the center, with a Christmas and New Year greeting to the King and his son inscribed within and around the rose. There were four poems and a song on the manuscript as well – many more than are on the cards now!

Sir Henry Cole pioneered the practice of sending Christmas cards in the United Kingdom in 1843. He was a senior civil servant (government employee) who had assisted with the establishment of the new ‘Public Record Office’ (now known as the Post Office), where he was an Assistant Keeper, and pondered how it could be used more often by regular people.

Sir Henry came up with the concept for Christmas cards with his artist friend John Horsley. They created the first card and sold it for one shilling. (That is only 5p or 8 cents now, but it was worth a lot more back then.) The card was divided into three sections. The outside two panels depicted individuals assisting the needy, while the middle panel depicted a family enjoying a huge Christmas meal! Some people were offended by the card since it depicted a youngster receiving a glass of alcohol! A total of 1000 (or maybe less!) copies were printed and sold. They are now extremely uncommon and may be purchased for hundreds of pounds or dollars! The tagline used to promote the initial cards was: “Just published, a Christmas Congratulations Card; or picture emblematical of old English festivity to perpetuate kind recollections between dear friends”!

The first postal service for regular people began in 1840, with the inaugural ‘Penny Post’ public postal delivery (Sir Henry Cole helped to introduce the Penny Post). Prior to it, only the very wealthy could afford to send anything through the mail. Because new trains were being built, the new Post Office was able to sell a penny stamp. These could transport far more mail than the horse and carriage that had previously been utilized. Trains may also go much quicker. Cards were even more popular in the United Kingdom when they could be sent in an unopened envelope for one halfpenny – half the price of a regular letter.

As printing processes developed, Christmas cards became considerably more popular and were mass-produced beginning around 1860. In 1870, the cost of mailing a post card, as well as Christmas cards, was half a cent. This meant that even more individuals could send cards.


The British Museum has an engraved card by the artist William Egley, who illustrated some of Charles Dickens’ novels. By the early 1900s, the practice had expanded throughout Europe, becoming notably popular in Germany.

Christmas cards grew significantly more popular as printing methods improved, and they were mass-produced beginning from 1860. The cost of shipping a post card, as well as Christmas cards, was half a penny in 1870. This meant that even more people could send greeting cards.

The early cards often featured images of the Nativity scene. Robins (a British bird) and snow landscapes were fashionable in the late 1800s. Because of the red uniforms they wore, the postmen were dubbed “Robin Postmen” at the time. Snow images were popular because they reminded people of the extremely harsh winter that occurred in the United Kingdom in 1836.

Read more about...  The Best Christmas Gifts for Avid Gamers

Christmas cards first emerged in the United States of America in the late 1840s, but they were prohibitively expensive for most individuals. In 1875, Louis Prang, a printer from Germany who had previously worked on early cards in the UK, began mass manufacturing cards so that more people could afford to buy them. Mr. Prang’s initial greeting cards depicted flowers, plants, and children. John C. Hall and two of his brothers founded Hallmark Cards in 1915, and they are still one of the largest card manufacturers today!

Annie Oakley, the famed sniper and star of Buffalo Bill’s Wild West show, sent the first recorded ‘personalised’ Christmas card in 1891. She was in Glasgow, Scotland, for Christmas 1891, and she sent cards back to her friends and relatives in the United States, each with a photograph of herself on it. She’s wearing tartan in the shot since she was in Scotland! Annie allegedly created the cards herself, which were then produced by a local printer.

Homemade cards were fashionable in the 1910s and 1920s. They were frequently odd forms with embellishments like as foil and ribbon. These were generally too fragile to transmit through the mail and had to be delivered by hand.

Nowadays, greeting cards feature a variety of images, including humor, winter sceneries, Santa Claus, and love memories from the past. Charities frequently sell their own Christmas cards to raise funds over the holiday season.

Charities can also profit from the seals or stickers used to seal card envelopes. This tradition began in Denmark in the early 1900s by a postal worker who felt it would be a wonderful way for charities to earn funds while also making the cards more beautiful. It was a huge hit, with over four million sold in the first year! Soon after, Sweden and Norway followed the practice, and it spread throughout Europe and to America.