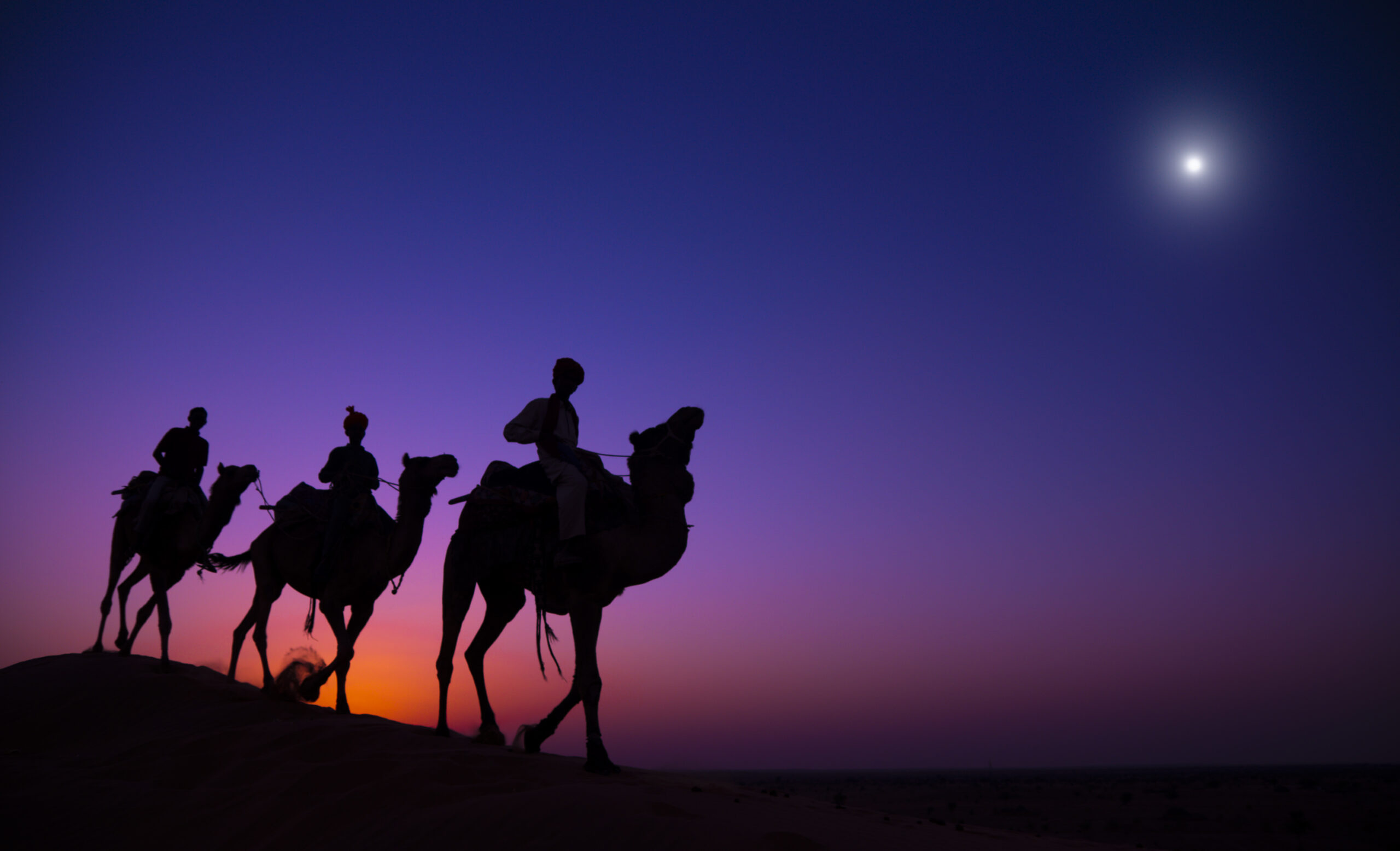 Matthew described the arrival of the wise men in Bethlehem in the Bible’s New Testament. According to Matthew 2:1, “Now when Jesus was born in Bethlehem of Judaea in the days of Herod the king, behold, there came wise men from the east to Jerusalem.”

They are not identified or counted elsewhere in this account of the wise men’s arrival. And their whereabouts remain unclear. The only way to figure out how many wise guys there are is to look at their gifts. There were three of them: gold, frankincense, and myrrh.

According to Matthew, they traveled to Jerusalem and met with King Herod. Because they had seen the King of the Jews’ star, they inquired about his location. The journey’s goal was to honor the new King.

This did not sit well with Herod. As far as he was concerned, he was the Jewish monarch, and any competition was certainly not welcome. But he was a cunning man. He promised the wise men that he would find the kid. He summoned his counselors and wanted to know where this king was. They chose Bethlehem because prophesies foretold that a king would arise from there to lead the people of Israel.

Herod then inquired as to how long it had been since the Star appeared. He instructed them to travel to Bethlehem in order to locate this kid. Then he requested that they report back to him so that he may also honor the new king.

These politically inept magi proceeded to Bethlehem and decided that the Star was right over a home. They discovered the infant Jesus and his mother, Mary, within. They gave their presents. Then they all had dreams in which they were cautioned not to return to Herod, so they went home rather than go to Jerusalem.

When the magi did not return, Herod was furious. Because the magi had failed to identify the Christ Child for him, Herod ordered that all male infants between the ages of newborn and two years be slain. However, Joseph, Mary, and Jesus had been forewarned. They’d already gone to Egypt at that point.

Who were these enigmatic individuals known as the magi or wise men?

The Bible says nothing more about the three magi after they arrived to worship the Christ child and returned home. However, there are prophesies in the Old Testament that appear to reference them. In this passage, Isaiah appears to be predicting the arrival of kings before to the birth of Christ.

“Arise, shine, for your light has come,
and the glory of the Lord rises upon you.
See, darkness covers the earth
and thick darkness is over the peoples,
but the Lord rises upon you
and his glory appears over you.
Nations will come to your light,
and kings to the brightness of your dawn.”
“Lift up your eyes and look about you:
All assemble and come to you;
your sons come from afar,
and your daughters are carried on the hip.
5 Then you will look and be radiant,
your heart will throb and swell with joy;
the wealth on the seas will be brought to you,
to you the riches of the nations will come.
6 Herds of camels will cover your land,
young camels of Midian and Ephah.
And all from Sheba will come,
bearing gold and incense
and proclaiming the praise of the Lord.”

This text appears to imply that the wise men (or kings?) carrying the gold and incense (frankincense) will arrive from a country inhabited by Midian and Ephah tribes. And these tribes resided in what is now Saudi Arabia’s northern region. Nabatea was the name of the kingdom during the time.

Alternatively, the kingdom might have been in Jordan, near Petra.

Aretas IV, the ruler of Nabatea at the period, was in contact with Herod and might have sent the magi on their search as a diplomatic mission to Herod. The Star, on the other hand, appears to have been considerably more significant to the wise men than simple kingdom politics.

Some academics believe that Psalms 68:29 is another magi prophesy.

“Because of Thy temple at Jerusalem shall kings bring presents unto Thee.”

If that’s the case, it’s not very apparent.

Sheba has long been considered to represent the kingdom of Saba, which flourished between 1200 B.C. and 275 A.D. and whose geographical area ranged from Ethiopia to southern Saudi Arabia. The story of the Queen of Sheba’s travel to Jerusalem to see Solomon is widely known.

Seba was most likely in Ethiopia or Egypt. Seba might be the ancient city of Meroe on the Nile’s bank. Tarshish has been identified by some academics as Seville in Spain, while others choose Sardinia or Sicily. In addition, Tarshish is an ancient town in Lebanon. The judgment is still undecided on this one, but most believe the land was somewhere in the Mediterranean Sea.

There are several accounts about Christ’s birth in the Apocrypha, which are Biblical texts that are not regarded as Scripture. They are considered to have been written between the years 200 and 400 A.D. The Revelation of the Magi, a Syriac document preserved for centuries in the Vatican Library, was recently translated into English. The paper was made into a book by author Brent Landau. The narrative is recounted from the perspective of the wise men. In this narrative, there are twelve wise men, not three, who arrive from Shir, which is considered to be China.

Because the details of rites and customs in the Syriac scroll are so detailed, Landau believes the writers of the text were a sect attempting to re-enact the magi’s journey.

According to Christian legend, the magi were present at Jesus’ birth. However, evidence appears to show that they came to Him after a lengthy and difficult trip. He was probably around two years old when they arrived. This is why Herod ordered the execution of all male newborns under the age of two.

What were the magi’s names?

The names of the magi first occur in the Excerpta Latina Barbari, an eighth-century diary. The text is a transcription of a Greek scroll written around 500 A.D. that no longer exists. Bithisaria, Melichior, and Gathaspa were the names, which have now been altered to Balthasar, Melchior, and Gaspar. Their countries of origin were identified as Arabia, Ethiopia, Persia, and India, in that order. However, this writing did not emerge until the 700s and provides no context for the individuals listed.

Many records state that the wise men returned, either individually or together, to India. They were said to have become Christians and ministered to the people there. They constructed a church, and when they died, they were buried in it.

We’ll never know for sure who the magi were, whether they were priestly astrologers from Persia, ambassadors from Nabatea, or people from other nations. There is evidence that a Tamil monarch called Perumal from what is now Sri Lanka is also a contender for magi membership. According to German historian John of Hildesheim (1310-1375), one of the magi went via Taxila (now Punjab, Pakistan) on his route to the Adoration.

The bones of the magi

Despite the absence of proof, many legends were regarded as true by the people of the period. St. Helena, the mother of Emperor Constantine of Rome, journeyed to India two hundred years after the magi died and returned with their remains. She had them installed at Constantinople’s Church of St. Sofia.

In the latter decade of the sixth century, the Byzantine Emperor, Mauricius, had the bodies transported to Milan, Italy. The bones remained in Milan until the twelfth century, when there was an uprising. The German monarchs had historically also been the rulers of Italy, becoming the Holy Roman Empire when the two kingdoms were merged. The Lombard League, commanded by Milan, thwarted Emperor Frederick Barbarossa’s bid for the Italian throne. However, Frederick had recruited the assistance of the archbishop of Cologne, who had retaken Milan. In exchange for payment, Frederick transported the magi’s sacred bones to Cologne, where a church was erected to contain them.

The bones of six men, reportedly the magi who knelt in worship before the Christ infant, are buried in Cologne. Their real identities have been lost to the mists of time and mythology. However, the narrative lives on.