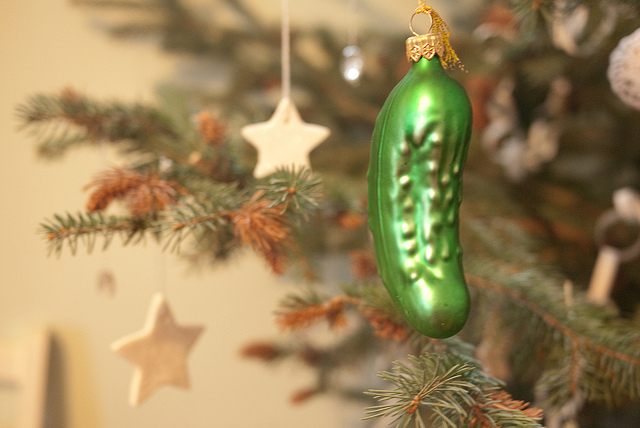 If you’re anything like me, you’re either laughing out loud or ashamed that you’ve never heard of the famed Christmas Pickle Tradition. That being said, you may have heard of it but know very nothing about it. Don’t worry. This page will go into great detail on the origins, history, and tradition itself.

Christmas Day begins with a frenzied quest in many households (including mine). Kids and adults alike search the tree for a little green pickle-shaped ornament concealed among its branches. The person who discovers the pickle gets to open the first gift and brag about it for the rest of the year. It begins the day off with a lot of laughs and a little friendly competition, which is exactly how our tribe loves it. I’m not sure where our pickle originated from; all I know is that it’s been in the family for as long as anyone can remember. So we looked into the history of the Christmas pickle to find out what it is that keeps us seeking to this day.

The origins of the Christmas pickle are hazy.

If we know one thing about Christmas, it’s that tales abound. One of them claims that that in the American Civil War, there was a soldier named Pvt. John C. Lower who fought for the Union side. This soldier was born in Bavaria, which is today a part of Germany. The Confederate Army imprisoned him in Andersonville, Georgia at one time. He was dying of starvation and battling for his life. When he asked a guard for a pickle, the guard felt sorry for him. According to family lore, Pvt. John C. Lower acquired the required strength and mental endurance to endure this predicament via the astoundingly calm mercy of Almighty God. When he ultimately returned to his family, he began a pickle tradition in which a pickle was hidden in the Christmas tree for someone to uncover. The finder would experience prosperity and good fortune in the coming year.

Another narrative, based on a medieval legend, is popular in Berrien Springs, Michigan. Berrien Springs has been designated as the Christmas Pickle Capital of the World, with an annual pickle festival held during the first half of December. According to legend, St. Nicholas saved two Spanish boys. They were boarding students returning home for the holidays. They stayed at an inn on their way home, when the evil innkeeper murdered them and placed them in a pickle barrel. When St. Nicholas stopped at the same inn, he discovered the lads in the barrel and brought them back to life.

The most likely story, however, has it this way, and makes sense with the two tales. Woolworths began selling blown-glass decorations imported from Germany in the 1880s, some of which were shaped like fruits and vegetables. Around the same period, a legend spread that Germans placed a pickle as the final ornament on their Christmas tree. The youngster who found the pickle first got to unwrap one additional gift. However, when Americans contacted the Old Country, the majority of Germans had never heard of the practice. According to popular belief, the story was concocted by a smart salesperson in order to sell more pickle ornaments, and if today’s trees are any indicator, it appears to have succeeded.

The History of the Christmas Pickle Tradition

The truth of the enthralling Christmas Pickle custom may never be discovered. But remember how, in the 1800s, glass Christmas decorations were handcrafted and hand-produced in Germany before being carefully shipped across the Atlantic to the United States of America? Glass-blowing was practiced in a tiny hamlet named Lauscha as early as 1597, according to historical texts. Lauscha is located in the German state of Thuringia. The town is well-known for its glass-blowing. Glassblowers would make drinking glasses and glass containers. In 1847, a few Lauscha artisans began manufacturing Glasschmuck, or glass decorations. They were fashioned in the form of several common fruits and tree nuts.

Hand blowing and molds are used to create these one-of-a-kind glass decorations. Soon after they were produced, the decorations were shipped to all regions of Europe, England, and the United States.

Lauscha-made glass pickle decorations are now available in the United States, having been imported from Germany. While it appears that many Germans have never even heard of the Christmas Pickle Custom, these pickle decorations are marketed alongside a “German” tradition tale. All we know is that the pickle decorations were marketed in many parts of Germany, particularly in the districts that run from Höxter in North Rhine-Westphalia all the way through to Kissing in Bavaria. Perhaps the Germans are simply exceptionally skilled at keeping secrets hidden.

How popular is this tradition?

With all of the uncertainty surrounding the custom, and the blank expressions that typically accompany individuals who are confronted with the question, how popular is the ritual? According to a YouGov poll, just 7% of Germans had ever heard of the custom, also known as “Weihnachtsgurke,” and only around 2-6% of Germans (with children) who know about the tradition actually perform it!

That being said, in the early 1980s, a store named Old World Christmas began selling these traditional, mouth-blown glass pickle decorations manufactured in Lausch, Germany (along with other glass-blown ornaments). For the past 37 years, the pickle ornament has been their best-seller. In 2017, they sold over 25,000 units. The story featured on the box might have been written by the company’s founder, Tim Merck. We may never find out.

What do the pickle decorations look?

The pickle decorations have the appearance of, well, pickles. They’re composed of either glossy or matte green glass (rather than actual pickles). Some might be highly intricate, while others are not. Others may be personified as having eyes and a mouth and wearing hats and scarves. A few of pickle slices are additional decoration.

Where can I get a pickle ornament?

Traditional pickle Christmas decorations may be purchased online from a variety of sources, including Amazon and other smaller retailers. Take a time to read the site’s own narrative on the origins and traditions of the notorious Christmas Pickle ornament!

That’s all there is to it. While we don’t know the exact tale behind the Christmas pickle, it could be more thrilling to embrace it as a mystery. Regardless, the custom may be continued by hanging the pickle ornament last and hiding it. The first person to discover it will undoubtedly have excellent success in the next year.

If you would like to buy a Christmas Pickle please consider using out links as it does help us cover our server costs! There is no additional fees passed on to you! Check out some of our favorites below…