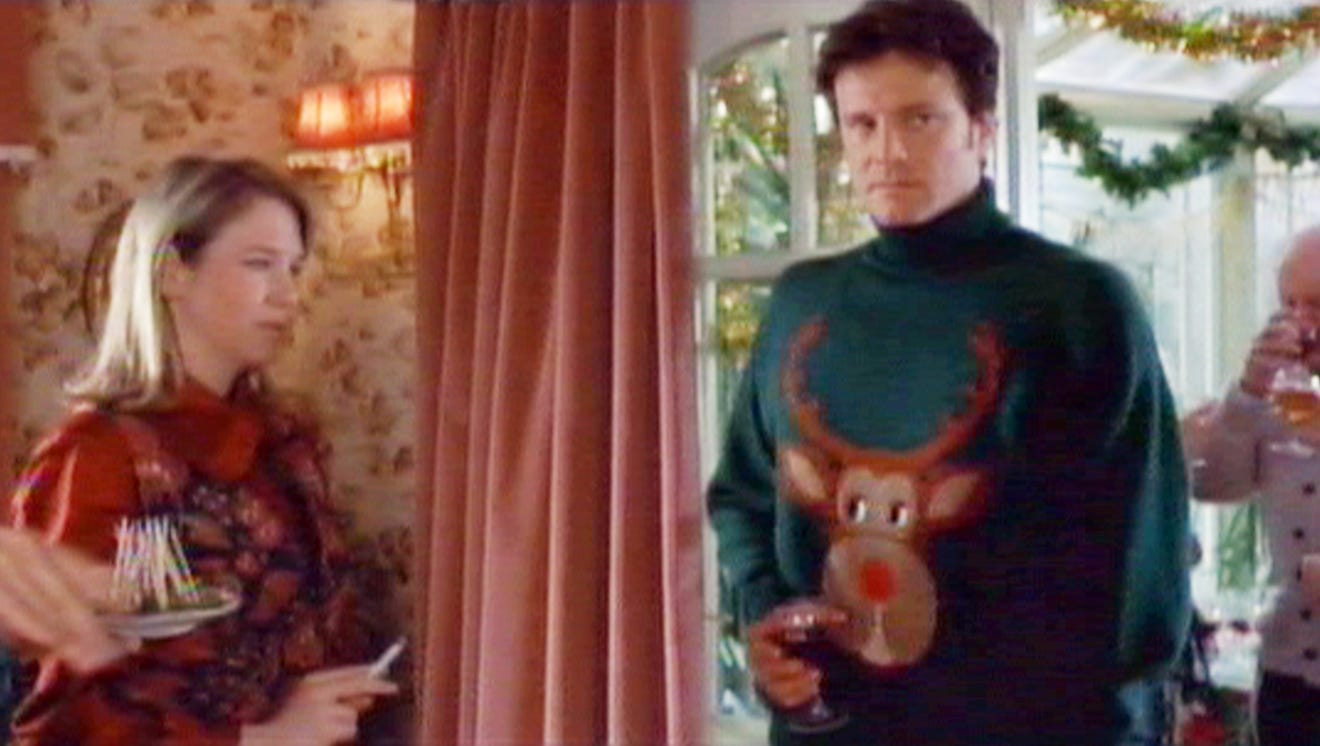 Some anthropologists might point to Colin Firth’s performance as stuffy lawyer Mark Darcy in 2001’s Bridget Jones’ Diary as the start of the Ugly Christmas Sweater fad that sweeps the country every Christmas season.

Come late November into December the ugly woolen clothing is all over the big screen. But the funny reindeer on the gloomy Darcy remains the trend setter.

The sweater has a flashback appearance in this year’s Bridget Jones’ Baby, the third installment in the series starring Renee Zellweger as the title character.

Sharon Maguire, the director of all three films in the trilogy, says there were a lot of debates about the initial, cosmically-bad sweater choice for the pivotal scene in which Bridget meets Darcy at a party.

“The original sweater went through many designs because it had to be just right. The character of Mr. Darcy is a constipated English prig when we first meet him so we needed something totally ridiculous to pierce that pomposity. And for some reason neither Santas nor X-mas trees nor snowmen worked as well as that red-nosed moose or reindeer we chose. It also had to look home-knit, something his mother knitted for him.”

Even the moose or reindeer or whatever was a serious, or perhaps semi-serious, topic of conversation.

“First versions of the moose were too small and too subtle. The moose eyes weren’t dopey enough. The horns weren’t large or waggly enough either. It also had to work for the camera. It’s a reveal, so the top of sweater had to be plain and make Darcy look kinda cool on Bridget’s first appearance. Although it’s impossible to look cool in a turtleneck sweater when you’re over 17 and not a model.”

Thank’s for that image. Look what you began in movies with Christmas sweaters everywhere, Sharon, Colin, and Mark Darcy! It had to be brought back in the third film, of course “because it serves as a constant reminder to Darcy that Bridget means ‘home.’ They’ve known one other since they were youngsters and she raced around his paddling pool naked.’ “Maguire explains.

“It was also a reminder of the third film’s theme, which was that love cannot be rationalized. People don’t always match on paper, and love is insane, foolish, and irrational, yet love legislates for itself “Maguire explains.