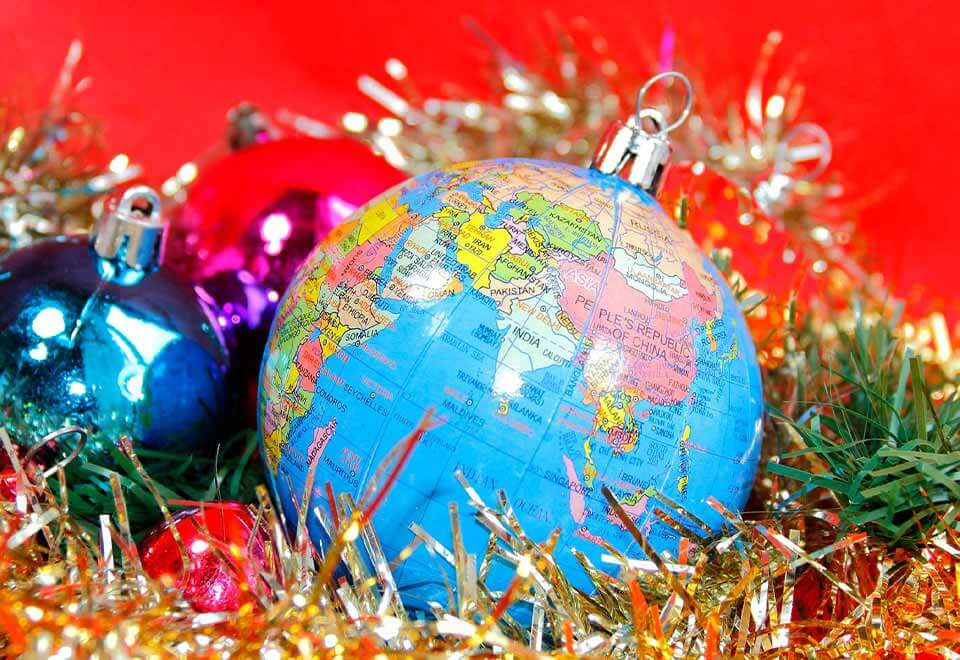 Christmas customs vary throughout the world, yet they nonetheless share fundamental characteristics, such as themes of light, evergreens, and optimism. Our current Christmas, arguably the most recognized holiday in the world, is the result of hundreds of years of secular and religious traditions from throughout the world, many of which are centered on the winter solstice.

Learn about the roots of Christmas customs from throughout the world, such as the Yule log, caroling, and candy canes, and how Christmas is celebrated in Australia.

Every year on December 13, most Scandinavians celebrate St. Lucia (also known as St. Lucy). St. Lucia Day was first observed in Sweden, but by the mid-nineteenth century, it had spread to Denmark and Finland.

Did you know that Poinsettias are named after Joel R. Poinsett, an American pastor in Mexico who brought the red-and-green plant to America in 1828.

In some nations, the festival is seen as the start of the Christmas season and is frequently referred to as “little Yule.” Traditionally, the eldest daughter in each household awakens early and wakes each member of her family, clothed in a long, white gown with a crimson ribbon and wearing a crown made of twigs with nine lit candles. For the time being, she is referred to as “Lussi” or “Lussibruden” (Lucy bride). The family then eats breakfast in a candle-lit parlor.

On St. Lucia Day, any shooting or fishing was done by torchlight, and residents brightly lit their homes. Men, women, and children would march through the streets with torches at night. The night would come to a close when everyone tossed their torches into a giant mound of straw, resulting in a massive bonfire. Today, in Finland, one girl is chosen to serve as the national Lucia, and she is celebrated in a procession accompanied by torchbearers.

The idea of light is central to St. Lucia Day, as her name is derived from the Latin word lux, which means “light.” Her feast day is near the shortest day of the year when the sun’s light begins to return. Lucia lived in Syracuse during the fourth century when Christians were frequently persecuted. Unfortunately, most of her tale has been forgotten over time. One popular tale has it that Lucia lost her eyes while being tortured by Diocletian for her Christian beliefs. Others believe she may have pulled her own eyes out in order to protest the mistreatment of Christians. The patron saint of the blind is Lucia.

Read more about...  11 strange and amazing Christmas customs from around the world

On Christmas Eve, many Finns attend the sauna. Families gather to listen to the national radio program “Peace on Earth” during Christmas. It is traditional to pay respects to the graves of deceased family members.

The Yule log originated in Norway. The Yule log was used by the ancient Norse to commemorate the return of the sun at the winter solstice. The term “yule” is derived from the Norse word hweol, which means “wheel.” The sun, according to the Norse, was a huge wheel of fire that moved towards and then away from the earth. Have you ever wondered why the family hearth is such an important element of the traditional Christmas scene? This custom can be traced back to the Norse Yule log. It is also most likely to blame for the popularity of log-shaped cheese, cakes, and sweets around the holidays.

The custom of adorning Christmas trees originated in Germany. The German winter solstice custom had traditionally included the decoration of evergreen trees. In the early 17th century, the first “Christmas trees” specifically adorned and named after the Christian festival emerged in Strasbourg (part of Alsace). Christmas trees first appeared in various areas of Germany around 1750, and especially after 1771, when Johann Wolfgang von Goethe visited Strasbourg and instantly incorporated a Christmas tree in his novel, The Suffering of Young Werther.

Joel R. Poinsett, the American minister to Mexico at the time, transported a red-and-green plant from Mexico to America in 1828. The plants, known as poinsettias after Poinsett, began appearing in greenhouses as early as 1830 because their colors looked appropriate for the new holiday. They were first sold during Christmas in New York shops in 1870. They had become a global emblem of the celebration by 1900.

Pinatas are paper-mâché sculptures loaded with sweets and money that are suspended from the ceiling in Mexico. The kids then take turns striking the pinata until it breaks, releasing a slew of goodies onto the floor. Children scramble to collect as much riches as they can.

Read more about...  Elf on the Shelf the History of Origin Story

Christmas cards may be traced all the way back to England. In the late 1830s, an Englishman called John Calcott Horsley helped popularize the custom of sending Christmas greeting cards by creating tiny cards with festive landscapes and a pre-written holiday greeting. Because of more efficient post offices in England and the United States, the cards were instant sensations. Similar cards were being manufactured around the same time by R.H. Pease, the first American card manufacturer, in Albany, New York, and Louis Prang, a German immigrant to America in 1850.

Mistletoe was long thought to have magical properties by Celtic and Teutonic peoples. It was thought to be capable of healing wounds and increasing fertility. Mistletoe was placed in homes by Celts to bring good luck and fend off evil spirits. During the Victorian period, the English would hang Mistletoe sprigs from ceilings and doors during the holidays. If someone was discovered standing beneath the Mistletoe, they would be kissed by someone else in the room, a rare occurrence in Victorian culture.

Christmas pudding, often known as “figgy pudding” or plum pudding, is a Middle Ages English delicacy. Suet, flour, sugar, raisins, nuts, and spices are wrapped loosely in fabric and cooked until the contents have expanded enough to fill the cloth. The cake is then unwrapped, cut, and covered with cream.

Caroling originated in England as well. Wandering musicians would move from town to town, visiting castles and wealthy people’s houses. The musicians hoped to receive a hot supper or money in exchange for their performance.

On Christmas Eve, youngsters in the United States and England hang stockings on their bedposts or near a fireplace, thinking that they would be filled with treats as they sleep. Similar-minded youngsters in Scandinavia put their shoes on the hearth. This custom can be traced back to Saint Nicholas tales. One tale speaks of three impoverished sisters who were unable to marry because they did not have enough money for a dowry. St. Nick sent gold coins to each of the three sisters to save them from being sold by their father. One flew down the chimney and landed in a pair of shoes lying on the fireplace. Another went through a window and into a pair of socks left to dry by the fire.

Read more about...  The History of Christmas Lumps of Coal for Naughty Kids

Christmas is known as Noel in France. This is derived from the French word les bonnes nouvelles, which translates as “the good news” and alludes to the gospel.

Some individuals in southern France burn a log in their houses from Christmas Eve until New Year’s Day. This is derived from an ancient practice in which farmers would utilize a portion of the wood to assure good fortune for the following year’s harvest.

Christmas is known as Il Natale in Italy, which translates as “the birthday.”

In Australia, the holiday falls in the middle of summer, and it is not uncommon for temperatures to reach 100 degrees Fahrenheit in some areas of the country on Christmas Day.

Beach time and outdoor barbecues are popular during the warm and sunny Australian Christmas season. Family gatherings, present exchanges, and either a heated lunch with ham, turkey, pig, or seafood or barbeques are traditional Christmas Day traditions.

A typical twelve-course dinner is prepared by Ukrainians. The youngest kid in a family looks through the window for the evening star to emerge, signaling that the feast may begin.

Most Christmas customs in Canada are fairly similar to those in the United States. Indigenous Inuits in the extreme north of the nation celebrate Sinck Tuck, a winter holiday that includes gatherings with dancing and gift-giving.

Many Greeks believe in kallikantzeri, goblins who appear to wreak havoc over the twelve days of Christmas. On January 1, St. Basil’s Day, gifts are traditionally exchanged.

In most southern European, Central American, and South American countries, the main décor is a manager scene. In 1224, St. Francis of Assisi constructed the first living nativity to assist his people to understand Jesus’ birth.

The first eggnog prepared in the United States, according to Captain John Smith’s accounts, was drank in his 1607 Jamestown colony. Nog is derived from the word grog, which refers to any rum-based drink.